So sorry guys!  Well, a lot has changed and yet very little has changed.  The road construction is at a halt, so we just keep moving forward.  We made the decision to go forward and no longer put everything on hold for them like we did for a year and a half.  It will likely take us a couple years to move over now.  But that is ok.  It will mean more in the end because we are doing it under our own power.  The biggest change was that decision.

Not so much has changed as I ended up with two rabbits as house pets for the winter.  They are REW (red eyed white) standard rex rabbits.  They were born in October and came all the way from southern BC to join our farm.  They will provide us with our white pelts.  I love my rex rabbits.  I will breed them in June to give them plenty of time to grow nice a big.  No early kindling for this pair. 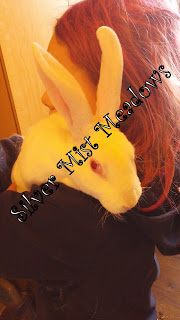 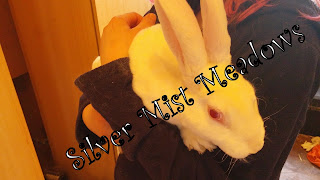 Yes, we know.  The rabbits eyes match my daughter's hair!  There are many things to argue about in life.  Hair keeps growing, not something I am going to argue about.

The next new thing......  My rebuilt greenhouse!  We had a massive storm hit about 2 weeks ago.  The driving winds ripped the greenhouse plastic and the snow load broke a few of the rafters.  I lost everything that was in there.  Over $3,000 in damages and lost plants and such.  But, the bright side was that it gave me the chance to build it with the alterations I had been wanting to do for a couple years.  We will see how the new one works for us.  The plastic greenhouse was perfect for light.  It could get hot in the summers if I didnt have a barn fan drawing out air.  But the winters, unless I insulated all of it, which cut out the light, it didnt stay warm enough to grow anything as it would still be below 0 C and freeze.  The new one is not really what I had in mind, but it is close and a start!  The bottom half of the walls are solid and insulated and I used old windows we found/picked up for the upper half and insulated the roof.  It means I will have to use a few grow lights in the winter, but it is better then nothing!
*Pictures to come when it is done*

We finished our planting plant for the crops for this year.  After last year being such a bad drought, most the crops were a write off by the insurance company.  But the barley did really well!  So, lots of barley being planted this year!  Hopefully it does as well if not better.